Why Your School Should Embrace Change

It’s time to chill out and accept change.

The public education world is one of change. Yet educators still tire of the constant stream of “changes” that they see every year. Program after program comes and goes. How then, should we as educators relate to change?

I’m embarrassed to say that my classroom became “my territory” at some point in my third year of teaching. In fact, it became such a “territory” that it felt like every change proposed by the front office was an act of war. Others were violating my boundaries and it hurt.

One night I remember not being able to sleep, worrying about a rally that I had planned being rescheduled. “I can’t believe they are taking this from me!” I thought to myself.

Here are some ways that I’ve come to relate to change as a teacher.

1. Relax Your Sense of Reality and Become Relaxed

“Not everything that you ‘think’ you experience is accurate.”

I tell myself this when I’m in a staff meeting and I hear that some big change is coming, one that’s probably going to change much of what I do inside my classroom.

Often, this huge transformation never comes. Just because my mind thinks that something “bad” is coming, does not mean that it’s actually going to happen.

When change does arrive, I’m often made better by it.

2. Allowing for More Allows for More

“The man with the bag of gold can’t hand it to me if I keep him locked out.”

Locking myself away from change means that both the bad and the good that change could bring are inaccessible to me. Personally, I want to welcome the grand stuff into my life, even if I have to suffer difficulty occasionally.

I’ve been part of at least a handful of programs that are no longer in fully in operation on my campus. I could have resisted these programs outright and had no part in them. The programs would still have gone away (it was not me who decided they would stop, after all), but I would have missed out on all the training opportunities and time with my colleagues learning from some of the coolest educator developers I know.

I don’t have all the answers as an educator. Sometimes, I can feel like I know much better than those that attempt to change my classroom practice. However, nothing says that I cannot listen with an open mind and open heart: especially when those speaking want to assist students as much as me.

I want to hear anything that can impact the lives of my students, even if it’s going to cost me some heartache and frustration in the end. At least, that’s what I tell myself on my good days.

What do you think? How do you handle the crazy amount of changes that you encounter as an educator?

Image Copyright © 2014 Lightstock, LLC and is licensed by Triumphant Heart International, Inc. and is used with permission. Photo is for illustrative purposes only. Any person depicted in the photo, if any, is a model. 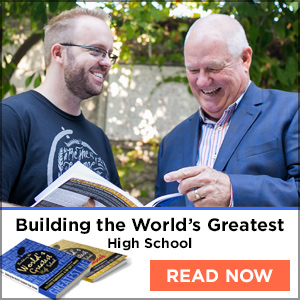